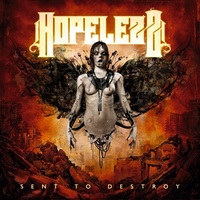 Looking at the band name, it’s tempting to think back to those nu-metal bands that took from the KoRn spelling book and started replacing letters to alter the vanilla spellings. Thankfully, it doesn’t take more than a few seconds to see that Hopelezz is far from that particular genre. In fact, they come out thrashing!

Sent to Destroy opens well. The dark intro suitably introduces the mood and “Borderline” kicks things into high gear almost instantly, with a modern thrashy approach that balances groove with melodic death riffing structures. There is a modern melodic death metal feel, and that continues once the vocals appear. What’s pleasant about Hopelezz’s approach is how brutal it can be on occasion. The opening of “Dividing the Sea” is blistering, as is the thrashy gallop of “In This Moment.” Where the band seems to get into troubles is when the more metalcore-ish influences come out. “From Deep Within” falls into a generic ‘core breakdown (which is partially salvaged by a nice solo) and “Insomnia” travels down similar waters. Vocally, the “clean(er)” ones could use some work. They have a bit of Robb Flynn feel to them, but without as much power. During “Everything Beneath,” things mellow out and the focus goes towards these vocals, and they just seem a bit too much. When they become the main thrust, as in the chorus of “We Are the Fire,” it seems to dilute the song (which features some killer thrashy sections).

There’s some good moments to be had on Sent to Destroy, but one hopes that the band weeds through some of the more metalcore-inspired influences (particularly the vocal ones) as they continue to forge their own sound. There is some very solid thrashy melodic death metal hidden underneath.