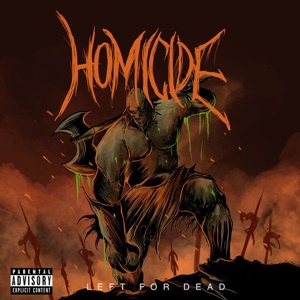 After going dark for twenty-five years, Montreal thrash act Homicide returns with their second full-length, the ironically titled Left for Dead. Usually bands of this nature welcome a second chance at gaining acclaim, fueled by the passion of their favorite genre and the need for expressing their creative ideas. At seven tracks and just a touch over thirty-minutes, you will gain a solid swath of Homicide’s old school, straightforward outlook on things – very much plugged into old school influences in a raw, in your face manner.

The riffs and vocal delivery often follow a similar rhythmic pattern – especially evident on the mid-tempo, Exodus-like “Point Blank Range” or through the punkish/Venom-oriented “Scorched Earth”. The lead breaks are very wild and frantic in nature – often serving as an ancillary primal rush beyond the tighter rhythms. You can expect start/stop transitions, heads down tempos that feature a snappy snare and natural double kick implementation, plus a forceful, semi-talk/semi roaring pattern vocally out of Gab Morency. The band has a bit of that punk/hardcore crossover angle at times in certain sections of “Shot to Hell” or “Nightmares of the Apocalypse”, but it’s not from a modern prism, more so from the originators like Motörhead, Voivod, and Cryptic Slaughter. Homicide struggles though to really develop strong hooks that can logically branch out into memorable material – as the musical hooks and subsequent basic vocal melodies/words sound amateurish for a group with decades of experience in the metal scene. When you haven’t release a record together since 1995, there better be something explosive, exciting, or stronger in the writing, execution, and production/tones that people want to hear – and unfortunately with Left for Dead, it’s third/fourth tier material that wouldn’t make it out of the rehearsal room for most new thrash bands, never mind the old guard. The opening lead for “Enemy of the State” is a flurry of notes signifying little development for the clean intro – while the closer “Scourge of God” is a 5:43 doom meets semi-power outing that just has no drive vocally, the chorus barked out without much conviction.

We need innovators – or at least memorable playing and songwriting – in thrash. Homicide needs to dig deep and develop a little more with their next outing or be content with a local level fanbase.