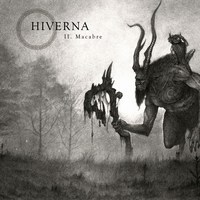 Like your black metal served up with big helping of flute? If so, you’re in luck. No? Not sure? Well, at least give it the old college try. What the hell am I talking about? Why, the Quebec band Hiverna, of course. Releasing their full-length debut in 2010 with I.Folklore, Hiverna return with their second on II.Macabre, a solid affair of pagan black metal, evoking sounds usually heard drifting on waves from across the Atlantic rather than here in North America. With this band, as with many black metal bands (more and more, it seems), there is a true main-man in David Verret, AKA Bardunor, who handles all composition and writing, guitars, drums and vocals…and all very adeptly at that. This is one talented dude, to be sure.

What can be said is that the black metal is pretty strong stuff. Engaging and engulfing, urgent and dark – with a paganized ambiance, Hiverna create a black metal frenzy that could perhaps sit somewhere in between Winterfylleth, Arkona and Drudkh. Strong on melody, guitars tremolo-pick out melancholy tunes over driving beats and hellishly screamed vocals. Hiverna brings a high level of energy to the outing as well, this isn’t one of those elven-romp-through-the-pleasant-woodland-realm kind of albums. The track “Malice” is a prime example of the heft and force that Hiverna brings on this outing. With hearty and clear production, II.Macabre offers rich and pretty muscular music, much to its benefit. Additionally, there is a good amount of texture and variance – folkish sections with violin and acoustic guitar create nice depth to the album.

But with II.Macabre, the catch is with the flute. While not featured on every moment of the album (thankfully), it is certainly a main instrument herein. Rather than used for ambiance, there are flute parts written for a majority of the songs, some working well, some sounding perhaps forced or at least, unnecessary. Granted, the playing is very good, and this brings an element that distinguishes Hiverna from its peers. Definitely worth a listen for fans of pagan black metal, I guess it’s a matter of taste on how you’ll feel about this element of the band…but of course, taste is what it’s all about, anyway.