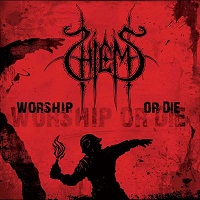 Forgotten Tomb needs to get on the follow-up to Negative Megalomonia and get on it fast. That shit is demoralizing. In its place is the side project from FT mainman Algol, in the form of Hiems. It has the twisted stance of Forgotten Tomb (obviously), but Worship or Die falls under the black metal banner for obvious reasons.

Expertly-produced (this thing sounds immense), Worship or Die features a myriad of Algol’s most satisfying riffs and arrangements to date. Case in point, the rollicking “Wounds Just Death Can Heal,” which contains a savage, twisted, note-bending riff that weaves its way around the song

like a tentacle. It’s almost too wretched to bear.

The winding “I” or the blunt-force thrust of “Adventum” are similar tracks of note, but it is the oddball cover of Judas Priest’s “Race With the Devil” that proves  Hiems aren’t too full of themselves (unlike of other BM bands

Unlike a lot of Hiems’ contemporaries who prefer the “three yards and a cloud of dust” approach to BM (i.e. do the same thing over and over and over), Algol has a firm grip on what is needed for a cohesive, challenging BM affair. Worship or Die is just that. Now, get on that new Forgotten Tomb album!