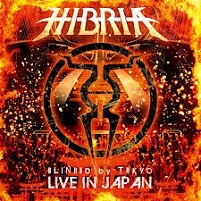 An unsung power metal entity that we should devote more attention to, Brazil’s Hibria have done what so many other smart bands do – they’ve devoted themselves to European and Asian territories. Angra notwithstanding, Hibria is the country’s premier melodic metal export, with their heralded Defying the Rules debut and The Skull Collectors albums serving as the foundation for a career that while sparse in output, has made them roll off the tongues for those “in-the-know.” Thus, their Blinded by Tokyo: Live in Japan live set serves to (potentially) indoctrinate those previously unaware of their brand of fiery power metal.

A two-disc set (CD/DVD of the show), Blinded by Tokyo finds the Brazilians performing in front of an enthusiastic throng, who clearly, are familiar with the band’s wares. We’ll have to side with our Japanese friends here, for cuts like “Blind Ride” “Defying the Rules” and most notably, “Shoot Me Down” (the throng gives massive applause to the dueling guitar solos) possess an intoxicating element to them, one that is levied by singer Iuri Sanson, who possesses the necessary zest to his vocals to hit the highs.

The band’s comfort zone is in the mid-tempo range, preferring to use those high-action speed bouts intermittently. Therefore, nods should go to “Blinded by Faith” and “The Anger Inside” as songs that best serve Hibria’s ability to root themselves in top-notch riff/vocal interplay. The Brazilians are even able to get away with an encore, trotting out four songs to close the set, including their apparent staple “Rotten Souls.”

Making a dent in the North American market has proven to be difficult for Hibria, which on many levels, is befuddling considering their superiority over the bands that actually get to make things happen over here. At any rate, Blinded by Tokyo: Live in Japan is one of those top-notch introductory releases that prompts curious souls to head out for further inspection. Count Blistering in those ranks.