Hexen – Being And Nothingness (Pulverised Records) 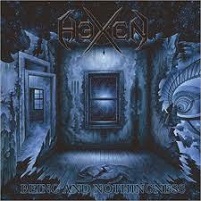 Since every American label is either stacked to the gills or tired of signing like-minded retro thrash metal bands, Los Angeles thrashers Hexen opted for Singapore-based Pulverised Records for the release of their sophomore album, Being And Nothingness. The quartet tries to create separation from the thrash pack by labeling themselves as melodic thrash, but sheesh, that’s quite the broad and tricky term – just take it from someone who used to play in a band that went under the same heading. It’s a losing battle you can’t win.

Nevertheless, Being And Nothingness thrashes with a heads-down-so-we-can-gaze-at-our-stupid-high-tops angle while employing a deft degree of technicality, a lot of which comes from guitarists Ronny Dorian and Tak Arayan. The pair certainly can get down with nimble, Coroner-like riffs, some of which buzz like hornets on “Walk As Many, Stand As One” and “Indefinite Archetype.” They’re not afraid to toss in some melody (hence, the above-mentioned tag), and it shines during album highlight “Defcon Rising.”

Bassist/vocalist Andre Hartoonian is the band’s biggest detriment, with a singularly-focused grunt that is sub-Tom Angelripper to the nth degree. Hartoonian’s vocals run ragged through the album’s nine cuts with little regard for placement or wherewithal in regards to Hexen’s strengths. It’s usually up to Dorian and Arayan to bail things out, like they do on the surging “The Nescient,” a track that is the most exploratory of the lot, chalk-full of acoustic guitars and adventurous melodies.

While Hexen is not staring at greatness from across the road, they’re limiting their mass appeal by sticking with generic thrash vocals. Understandably, there’s a code of conduct to follow with thrash and Hexen might be too afraid of being stripped of their Infernal Overkill patches if they went the clean

and/or discernible vocal route, but one can’t help but think how much betterBeing And Nothingness would be if a different throat was out front.