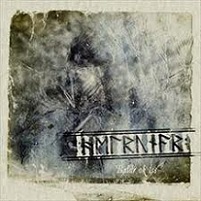 A formula that is as proven as any in metal, epic black metal can do little wrong when performed with the type of care and dare we say, “honor” that it rightly deserves. The marriage of atmospheric bliss and BM intensity is as glorious as they come, and when a new participant comes along, it only serves to galvanize the sound even more.

Germany’s Helrunar are now onto album #3, the first with new North American imprint Prophecy. Baldr Ok Iss as it stands, is a heroic salvo of classic mid-90’s epic metal with some cool brutal twists that adds some variety and beef to an all-around solid, near-flawless affair.

Very much at home with those clashing, churning chords that made early Enslaved and Borknagar heroes, Helrunar doles out a handful of crushing riffs in a variety of ways. Noticeable entrants include the end riff on “Baldr,” a colossal wave of quasi-melodic angling and depth that segues into the crush-and-rush of “Iss,” a devastating rush of scathing chord runs and primal intensity.

The above-mentioned brutal and simple segments work like a charm on “Glamr,” a straightforward and forceful number that strips Helrunar down to its BM core. Perhaps the best song here is “Til Jaroar” an instantly memorable number with a hazy opening riff that is a delight of massive proportions.

It’s hard to mask one’s enthusiasm for an effort as this – Helrunar have forged a complete and grinding album that is stocked with memorable riffs and air-tight arrangements. Highly recommended for anyone with the slightest clue as to how friggin’ awesome epic black metal can be…