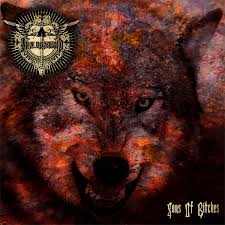 Amen, Hellbastard. Sons of Bitches is dedicated to “those who are currently outraged by the sheer patheticness humanity throws around on a daily basis.” File Blistering in that department and probably you as well, our faithful readership. For most and/or all of us, rarely a day passes when we stumble upon someone doing something of the idiotic variety. Heck, just take a stroll through your local city’s streets and you’ll happen to witness people acting flat-out dumb (e.g. dudes walking around with pants dangling around their waist). Totally amusing.

Responsible for the name “crust” (a term we throw around rather frequently), Britain’s Hellbastard have been kicking around since 1986, making them a part of the vaunted UK extreme metal scene that includes the likes of Napalm Death, Carcass, and Extreme Noise Terror. Remarkably, Hellbastard doesn’t come across like a bunch of aged, senile crust metallers, instead, they bring in a death/thrash hybrid, laced with syncopated grooves (“Sons of Bitches”) and hardcore shout-outs (“System Whore”). Furthermore, “We Had Evidence” opens with an atmospheric intro that wouldn’t be out of reach for modern black metal, only to kick into a whirling thrash composite.

As one of those overlooked treasures of the extreme metal underground, Hellbastard has defied convention, turning out a varied six-song effort that belies the rough and ragged reputation they’ve garnered after 26 years in the game. Hard to believe old dudes like this can sound as such, but we like surprises in these parts, and Sons of Bitches definitely falls into that category.