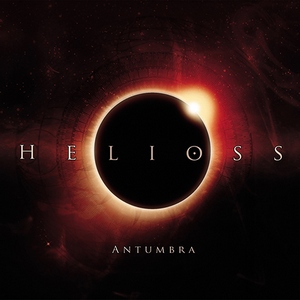 When discussing symphonic black/death metal bands, often the genre gets dumped on a bit for going overboard with the theatrics without the rest of the band keeping pace. For having grandeur without soul, so to speak. While it does ring true for some bands, there have been others along the way that have been successful in this regard, such as Anorexia Nervosa or Graveworm.

Both names cited above were picked for a specific purpose, as Helioss’ third full-length, Antumbra, seems to resonate some qualities from both bands without coming across as a duplication of either. The band does shoot ahead to some faster tempos, as the blazing opener “The World is Ours” or “The Ninth Hour” indicates. At other points, such as “Screaming in Silence,” have a more melodious and almost doomy crawl to them. Nevertheless, with a clear synth backing to the band to provide sweeping orchestrations at any tempo, it’s also obvious the band has layered them accordingly. Injections of more upfront and melodic moments (“Coupables”), as well as intricate and visceral riffs (“Santhara”) find their place without causing too much chaos. To give any indication of the balance of Helioss’ sound, the final cut is a cover of Bolt Thrower’s “…For Victory,” which is given a symphonic make-over while keeping a degree of the original’s brutality intact. If there’s one slight negative, it’s that the lengthy nature of the album starts to cause some deja-vu towards the latter half of the release.

Some thought has been put into Antumbra to keep it from becoming too overtly symphonic (which would neuter their sound). The pieces seem well-placed, and with some trimming down of the album length the band could really hit a sweet spot with their next release.