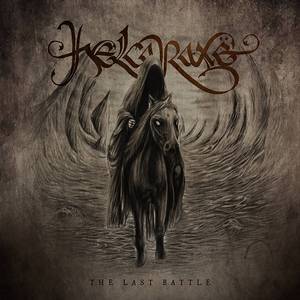 If there was ever a group that deserved the “underappreciated” card, it has to be that of New Jersey’s Helcaraxë. Slogging around under the radar of most since the release of 2007’s Triumph and Revenge, the band’s death metal has smarted utilized melodic sensibilities, accomplished songwriting, and fantastic artwork to round things out. The band’s fourth album, The Last Battle, continues Helcaraxë’s upword momentum, even if it has been four years since Red Dragon (a Tolkien-inspired affair, not Hannibal Lector).

For those unfamiliar with Helcaraxë, a great reference point would be that of Edge of Sanity. This is death metal for certain, but it relies more on strength of melody than just brute strength. These melodies aren’t the super clean or the commercially-driven type you’d associate with more modern melodic death metal bands, but more from the earlier Swedish movement (no, not Gothenburg). The result is an album of songs that can tastefully weave in some tastefully melodic instrumentation (check it out from the start with “The Old Blood Sings”), yet it never loses its punch or heaviness. Songs range from the more aggressive mid-tempo crunch of “Hunters” to the acoustic-driven “The Lion Throne” to the sweeping majesty of the closing title track – plenty of variety to keep listeners interested and coming back for more. There are some occasional clean vocals as well, used in a way that serves the song instead of accommodating the usual “heavy verse, clean chorus” mindset – never feeling cheapened or out of place. The same goes for the songwriting, with tracks ranging from 2 to 8-minutes, written in a way that pulls out the story (this is a concept album after all) in a natural and interesting way.

It may have been a while since we’ve heard from Helcaraxë but that doesn’t not lessen the impact of The Last Battle. A triumphant death metal album that carries a strong focus in story with ever-present melodies to sweeten the deal without souring its flavor. A band worth investigating immediately.