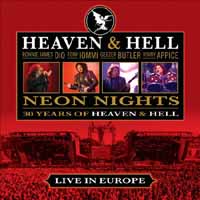 In what should be the first of many posthumous releases for Ronnie James Dio and Heaven & Hell, Neon Nights: Live In Europe comes across as a hastily-thrown together live set, without any real selling points. Reason being, the band already went down this path three years for their clearly-superior Live From Radio City Music Hall CD/DVD, so even the addition of songs from the band’s 2009 studio album The Devil You Know render this as hardly mandatory.

Comprised of 11 songs recorded in 2009 on the band’s European festival run, all of the classics are in tow (you had better have some idea – if not, shame on you), and Heaven & Hell sound every bit as old and lethargic as they should be, given their combined age is well over 300 years. At any rate, drummer Vinny Appice is clearly the weakest link of the band, seemingly slowing down every song in the band’s catalog. Appice’s playing is so snail-like and lethargic that once domineering numbers like “Mob Rules” (an obvious set opener) and the brilliant “Children of the Sea” are mere shells of their studio versions.

Dio has some gruff in his voice, which works best on the ever-underrated “I” and fresh “Fear.” The soaring highs of “Die Young” always benefited from the man’s soft touch, and is pulled off quite well here. “Heaven and Hell” is the set centerpiece, and it should be – it’s probably the best song in the entire Black Sabbath catalog, Ozzy included, and is picturesque for some call-and-response from the crowd. And of course, Dio’s in-song banter (he’s so polite!) is priceless.

Can’t find fault with the timing of this, as Dio’s name will probably be hovering around a lot longer now that he is no longer with us. If the porous nature ofNeon Nights: Live In Europe necessitates anything, it’s a re-issue of Heaven and Hell and Mob Rules. Get on it, please.