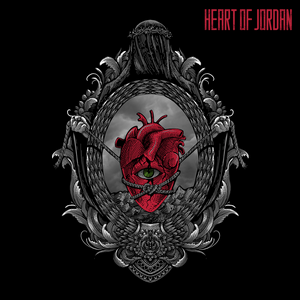 While metalcore is still a touchy subject for some, there’s still some quality acts that pop out of the woodwork every once in a while. Case in point is Heart of Jordan, who released their self-titled debut this fall. One of those releases that show the band’s influences on their sleeves and tend to follow the blueprints of the genre, but it’s so well-done that you can’t help to keep returning to it for another listen.

There are many parts of Heart of Jordan that harken back to the glory days of the genre in the 2000s. Energetic riffing that is part thrash and melodeath give away to some saccharine choruses (complete with clean vocals and warm melodies of course) with rock flair. “Deny” holds up as well as any other track from said era. There’s a direct and punchy approach that they often take that really makes the grooves pop (see “Eye” or “Shade”) and the harsh vocals hold nothing back from an emotional standpoint. They can play the heavy game quite well – crunchy riffs run amok in “Deaf Ears” and opener “Throne Alone” – and they avoid getting stuck in piling on breakdowns, instead focusing on the melodic side and it ultimately works in their favor. While some of the more melodic stuff teeters into the hard rock quadrant (see “Enslaved”), the genuine emotion is there and lets them soar when necessary.

A pleasant reminder of some of metalcore’s finer qualities, Heart of Jordan make their first full-length a memorable one. It will be interesting to see how they continue to progress along the way with such a strong foundation to support them. There’s a lot of appeal for melodic metal fans here.