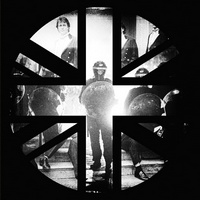 Originally released in 2014, Hateful Abandon where picked up by Candlelight shortly thereafter. Hence the reissue of Liars/Bastards, while the band starts concocting some new material. An interesting listen for sure, but this one is sure to pull on the “is this metal” strings and will undoubtedly not hit the marks for everyone.

Sounding like the bastard child of industrial, punk, and ‘80s gothic, it’s safe to say that you can’t fault Hateful Abandon for trying to find their own sound. The band owes as much to artists like Killing Joke and Joy Division as it does say, later day Burzum. The dark and depressive industrial sounds with a harsh electronic edge don’t exactly scream “metal” but it’s a sinister feeling that metalheads could certainly enjoy. It opens with one of the heaviest tracks to start, that being “Maze of Bastards,” complete with some hoarse shouts to accompany an almost militaristic drum and synth beat. There’s a really fascinating vibe to this track, along with the equally thunderous “There Will Never Be Peace.” Even at the softer end of the spectrum, you have a track like “Culprit,” complete with some clean, gothic-tinged singing and Atari-esque sound that does achieve an entrancing effect.

Unfortunately, Liars/Bastards does have its pitfalls as well. With this mostly electronic format of music, there is much repetition to be had in the individual tracks, particularly noticeable on “December” and “The Test.” Additionally, the lower timbre vocals presented in a number of the tracks have an almost hokey feel to them (see “The Walker”), owing much to that ‘80s gothic vibe but the remainder of the vocals seem to be a better fit for the band.

There’s no doubt that there’s an audience for Liars/Bastards, but with some ill-fitting vocals and high quantity of repetition, it does diminish its presence. Particularly if you are one of the more “dyed in the wool” metal types. If you are seeking a more industrialized/electronic approach, you may find a nugget to enjoy but for the rest of us this one feels more like a miss.