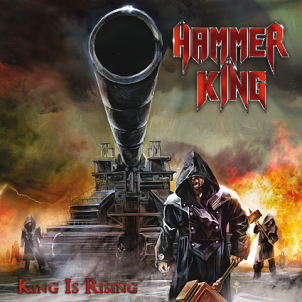 The rub with German metal is quite simple: Don’t change your sound. No matter what. If you’re tried and true, then dammit, you’re to remain as such for the remainder of your career. It’s what gets butts in festival seats and sells albums. Bands who choose otherwise are met with an untimely demise. Surely a classic, clichéd metal outfit like Hammer King would be frowned upon over here in the haughty States, but in continental Europe, they’re in good company. On their second full-length King is Rising, Hammer King extol the traditional as if their lives depended on it.

Vocalist Titan Fox V (he of Ross the Boss fame) has a thin, trebly deliver that sometimes sounds like a whine, like on “Warrior’s Reign.” He doesn’t have much power to his vocals, yet when he’s embedded “Battle Gorse” or the Hammerfall-like “The Hammer is the King,” he’s at his heroic, comfortable best. Aside from normalized, inoffensive jams like “Last Hellriders” and “Kingbrother,” there’s a quick castanets solo on “Viva La King,” which may or may not be a first in the world of power metal. To the band’s credit, the follow it up with the much better (and safer) “Battalions of War.”

Obviously, what you see is what you get on King is Rising, as Hammer King are pretty much the embodiment of what a true German metal band should be. No real thought to this one; just strap on the patch-filled leather vest and head down to the nearest Euro festival extravaganza. Hammer King will be there…they’ll be the ones with the castanets. 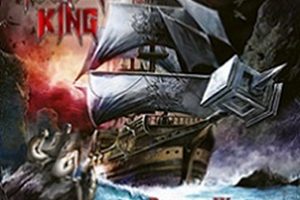