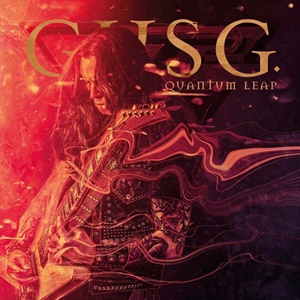 Proficient while executing tremendous vision and focus a multitude of ways, Gus G. has excelled at the art of the guitar – becoming a permanent fixture in the power metal scene as well as elevating his play to being in the ranks of axe players sharing the studio/stage with Ozzy Osbourne. As of late while releasing records under his main Firewind band, he’s also been issuing solo products – of which Quantum Leap combines his love of instrumental compositions and showcases some of his best songs / covers in a live context for a double disc extravaganza. Raiding the riff vaults, you will enjoy a mixture of styles and textures, melding together stellar musicianship moments and key circular refrains/themes that prove Gus is a stellar songwriter, and not just a veteran ace guitarist.

Those who love his familiar power metal and shred-oriented arpeggio runs will find major delight in his finger picking and uplifting choices during “Exosphere” and “Demon Stomp”. Versatility is key to maintaining interest in an instrumental effort – Gus taking cues from the greats like Joe Satriani, Tony MacAlpine, and Vinnie Moore (the latter making a guest solo appearance for “Force Majeure”). Allowing open rhythm section interplay from bassist Dennis Ward and drummer Will Hunt gives other shining moments – the progressive, off-time “Chronesthesia” intriguing, especially during its calmer, semi-new age sequences. Acoustic/electric layers allow “Enigma of Life” that throwback, breezy charm for a bluesy ballad – reminding this scribe of the classic late 70’s/early 80’s period of the much-missed Gary Moore. The left field synth wave nuances for “Night Driver” also aid the back half dynamics to the first CD – Gus choosing carefully placed runs, often bending notes and harmony sequences that are tasteful to that 80’s soundtrack period. The second album features live renditions of songs like “Fearless”, “Thrill of the Chase” and covers by Thin Lizzy (“Cold Sweat”) and Dire Straits (“Money for Nothing”) – Dennis Ward handling the vocals in his smooth melodic hard rock range, proving that Gus has plenty of value cranking up the proceedings and delivering these tracks to audiences far and wide.

His goal for Quantum Leap was to write and execute an instrumental album that wasn’t purely about showcasing his guitar abilities – and he succeeded. It’s the type of record that can be consumed in pieces or altogether, processed and enjoyed multiple times over years, and that’s an ideal achievement that any musician wants for their craft.