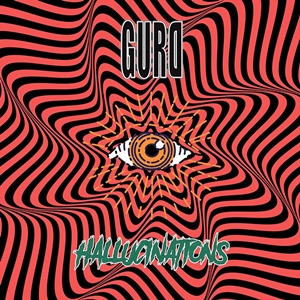 Since the mid-90’s Swiss act Gurd has been an active part of the groove/thrash metal scene, attaining more worldwide attention in the 1997-2000 period during their time on Century Media when albums like D-fect, Down the Drain, and Bedlam entered the fray. Hallucinations is the quartet’s eleventh studio record, their first in eight years – a very straightforward, infectious effort chock full of crunchy/swinging riffs, forceful vocals, plus those half-time groove shifts / gang-oriented choruses sure to get all the rebellious punters to stand and shout in unison.

References to The Ramones pop up during opener “Merry Go Round”, while “I Like the Pain” is a tribute to long-running cohorts Pro-Pain. The duo of V.O. Pulver and Pat lay down some sick, low-tuned chug on the rhythm front, while the supplementary leads possess adequate energy plus excitement that allows “Devil’s Bread” and “Ship in Distress” to cause massive carnage in clubs/larger festival gatherings. The stop/start activities allow drummer Steve to engage specific tracks in up-tempo thrash mechanics while supplying killer double kick / fill action against the locked in the pocket parts that keep “Taste for More” or Biohazard-esque “To the Floor” thrill rides. Lyrical content runs the gamut from ancient use of ergot that were later used in LSD to political frustration / distress, as the group handle the production in house thanks to the long-running professional studio V.O. owns through Little Creek Studio – capturing a thick wall of sound bursting at the seams. Highlights include the subtle, darker touches for “Ghosts of Black Holes” plus the twin harmony guitar twists and doomy/Crowbar-ish nature to “Egoist”, choosing to speed up the tempo in spots creating this dynamic stomp when returning to the main crushing musical components.

Gurd stateside probably relegates themselves to a cursory, cult-status due to lack of proper distribution and promotional opportunities over here. Do not discount their value as a groove/thrash metal staple – Hallucinations may give those fence-sitters reason to invest a second, deeper look at the catalog.