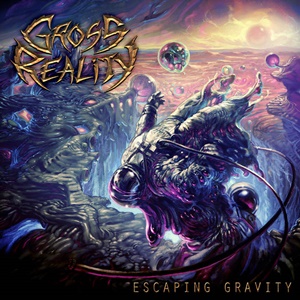 Timing doesn’t merely apply to musical signatures or tightness. In metal, it can be a simple matter of right place, right period for a genre to succeed. In the case of North Carolina’s Gross Reality – their first go around during 1991-1996 didn’t lead to a record deal, as thrash suffered a dip in popularity compared to death/black and alternative/nu-metal trends. Back together since 2009, the tides have improved – leading to their second full-length for Escaping Gravity. As a trio, the band choose to emphasize a more melodic framework to their style, while also accenting the material with progressive inflections that keep these eight songs beyond replicating Bay Area benchmarks we’ve heard hundreds of times before.

You’ll feel rhythm guitars that possess this jackhammer precision feel- the type of work that on “Zero Day” can suck the air out of the room, much like Testament/Metallica tantalizing against a wild card like Powermad. The transitions showcase the more modern/blitzkrieg aspects that newer artists such as Havok and Gama Bomb add to their toolboxes, even in the spacey clean introduction to “Invitation” – something one would expect from Forbidden if thrown into an Iron Maiden harmony vortex. Bassist Daniel Powell sits in that melodic mid-range to slightly higher delivery with his vocals – he’s not going to be the most savage/raw guy you’ve ever heard, as he’s more in that Heathen/Powermad-oriented style against a Hetfield-ish rhythmic pattern which gives Gross Reality a distinction marker for those who tire of screamers in this genre. His best work includes the heart pumping “Soul Worn Thin” and opener “Dimensional”. The dynamic interplay between all three builds momentum and fills out different colors and shapes depending on the atmosphere of a song – guitarist Roland Arthur and drummer Jason Wheeler using echoing refrains and calmer restraint for the tantalizing ethereal nature of the closing title track.

Keeping this record under 40 minutes aids those worrisome of wandering attention spans, and producer Jamie King aligns well with the band’s melodic thrash songwriting, bringing out the vibrant musicianship and caressing the hooks in all the right places. Top it off with a Par Olofsson cover that’s poster (and t-shirt) gold and you have the makings of another strong offering for the thrash hordes to savor.