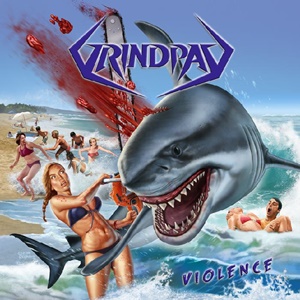 Dutch for ‘gravel path’, Grindpad are a quintet of musicians that straddle the crossover thrash/death style – together since 2006 and releasing four previous EP’s from 2008-2017 before finally issuing their debut full-length Violence for Iron Shield Records. Gaining a new rhythm section in between recordings, bassist Rik van Gageldonk and drummer Paul Beltman bring to the table a fierce competency that keeps the veterans attack sharp and on point – allowing the energy and adrenaline-oriented music to take command. It’s evident throughout the eleven songs that these gentlemen have studied a variety of European and North American influences, especially from the 80’s to early 90’s scene – lacerating the aural landscape with catchy riffs, gang-infused choruses, and songs that should incite massive crowd participation/slam activities.

The triplet guitar harmony crunch for the opening sequence of “Toxic Terror” illustrates a love of Testament during The Legacy period, Axel and J.G. spitting out point/counterpoint axe measures at a variety of mid-tempo crunch and slightly faster means. The death angles come in during the sinister blasting measures for “Revuelta”, vocalist Olivier van der Kruijf lacing his melodies with impassioned blood curdling screams that race at bullet train tempos. At other times the band settle into this crunchy thrash/hardcore mash up which will bring people back to classic S.O.D. – check out “Blood, Sweat and Pride” for the manic transitions, uppity thrash/double kick action, and stair step riff passages filled to the brim with melodic accents. The arrangements can go from under two minutes for opener “My Name is Violence” on up to the five-minute plus battering ram assault that is “MK Ultra” that features a lot of Bay Area Exodus meets Vio-lence-like qualities. And what thrash release wouldn’t be topped off if not seeking out Ed Repka for the cover art – where it’s not safe anymore to go into the waters.

Crossover thrash appears to be a hot genre again – Grindpad living for that late 80’s / early 90’s aspect on Violence. Quality performances and more than adequate songwriting diversity should get this band modest appeal – and probably win over many naysayers when airing these songs at peak volumes on live stages globally.