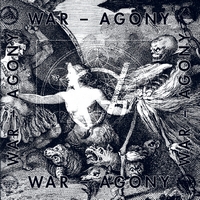 Some of the combinations of metal and hardcore that have been coming out lately are enough to make you forget that metalcore was such a dirty word. Of course, that’s because most of these newer hybrids are embracing the core values that the combo was initially based on instead of vying for commercial space. Germany’s Grim Vision are the lastest band to be used to champion the cause with their new 7” War Agony.

The first two tracks are pulverizing efforts in metallic, hardcore abrasion with an ample helping of d-beat punishment. The guitar tone is quite dirty, and despite their speed, has a feeling of oozing riffs to compliment the caustic screams. “Fallen Soldier” and “War Machine” waste no time with build up and go straight for the throat in their short, under 3-minute runtimes. Perfectly suiting to their frenetic energy, either track would do well to fire up an intense pit (and not the karate kicking variety) when introduced into the live setting. The final track, “Ten Minutes,” (though only about six minutes in reality) takes a more dark and sinister ambiance in its initial few minutes. The build is ominous, gradually elevating things until it’s about ready to burst. It’s an interesting track that proves the band is more capable than simply firing off d-beat ridden pummelings.

The three songs of War Agony don’t really venture too far outside of the norms, but it sure is an exquisite way to spend 10 minutes. Grim Vision gets the proportions of metal and hardcore right, and investigating a future full-length should solidify their place within the scene. Particularly if they can implement more tracks like “10 Minutes.”