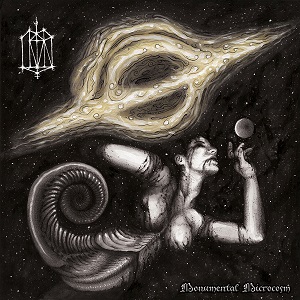 Clearly in the crosshairs of the metaphysical, existential and atmospheric, Greytomb is an Australian extreme metal trio who originally formed as Subterranean Drilling Machine in 2013. (Frankly, both names are great, so perhaps the band can call their next album Subterranean Drilling Machine, eh?) Their Monumental Microcosm EP is the follow-up to 2016’s A Perpetual Descent, a rather all-over-the-map foray that pulls the band’s sound in various directions, only to land squarely in the chaotic center.

The catch with Greytomb is that indeed they are atmospheric, but without having to bow to the demands of constant keyboard work. It all rests in the guitar work of founding member J. Angus, who can meld some wayward chords with the best of ‘em, sort of the Down Under version of Mithras cooling up to all-eras Borknagar. However, the variance in vocal choices found on “Null” along with the manic, frantic attack of “Antimeta” enables Greytomb to find the corridor to the otherworld where their extremity knows no bounds.

The only thing that throws these three jams off is that Greytomb don’t seem to fancy song structure much, but then again, in this sort of environment, it’s small potatoes. Regardless, Monumental Microcosm — great play on words — establishes Greytomb as one of those beyond space, here’s the kitchen sink and more bands, capable of bending the rules of extremity with a single flip of the cosmic switch.