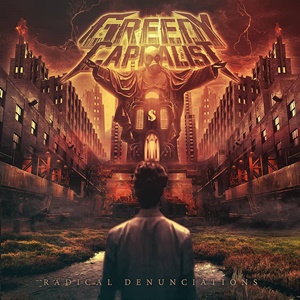 Forming in Greece and moving to Mexico, Greedy Capitalist arrived on the scene in 2017 with their death/thrash musical cocktail and released their debut EP Filthy Tenacities in 2018 before signing to Sleaszy Rider Records and recording/releasing this full-length Radical Denunciations. After a few spins it’s evident the band penetrate the sonic landscape with a sound that remains very groovy through it’s heaviness, intertwining influences from an era of the late 80’s to mid-1990’s where the UK death metal scene was blossoming against some Bay Area thrash acts also welcoming that brutal uptick aspect to their sound.

You’ll hear tempos that shift measure to measure from straightforward pounding thrash/groove measures to occasional semi-blasts, the guitars churning in similar tremolo picking to savage rhythms, while the vocals possess this Anselmo-esque bark and lead breaks fly in and out like Slayer-esque divebombs blowing up the aural skies. The musical foundation has a lot of Bolt Thrower / Napalm Death sonic assault qualities, the type of riffs that barrel down and rattle consumers to the core, surrounding themselves with aspects that are pure thrash in execution – check out the twists and turns for “Armed Against” and the double kick / tremolo-fueled “Domination” for some sick headbanging moments of energy, speed, and shapeshifting impact. Additional narrative soundbites and sonic elements appear sporadically to spruce up the proceedings, but ultimately the quartet succeed in just a brutal combination of riffs and transitions that are musically enticing without losing the plot so to speak. Everything has its place, and it’s great to hear a band like Greedy Capitalist that can intertwining various thrash/death influences in a tight manner that doesn’t forget about groove or hook parts while not pandering to the obvious. Drummer Humberto Lopez loves to throw around speedy tom rolls against his natural double kick pounding foundation, making “Zero Prospect” and “The Deluge” two standouts that illustrate his importance and talent.

At eight songs Radical Denunciations is another current album that keeps the eyes on an ‘all killer/less filler’ outlook, welcome to listeners who tire of bands that aren’t putting their best songwriting and performances forward. Those who love aspects of 80’s Testament against classic Bolt Thrower and Napalm Death (circa Diatribes) will appreciate Greedy Capitalist for their intensity, diversity, and execution on this record.