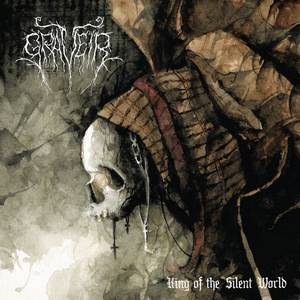 In 2006 a game released that carried an impact for yours truly that few have been able to match – Stalker: Shadow of Chernobyl. Though a questionable gameplay experience in retrospect (awkward, anyway), it captured something exceedingly well: mood. A bleak and forlorn essence permeated every aspect of the game’s world, fitting given it occupied an alternate reality in the aftermath of Chernobyl. This whole thing opens this review because that same focus on mood, with its potential for shortcomings, is exactly the experience I’ve had with King of The Silent World.

What Graveir brings to the table is exactly the above – often mid-paced atmospheric black metal that seethes with moodiness and murk. “The Fetch Of Crooked” is a dense maelstrom of undulating dark as it shifts back and forth in tempo. “Phantasms In Daguerre” is both an outstanding title and a journey through a malevolent fog – something that, in truth, could be applied to most songs within King of The Silent World.

Therein lies the primary issue with the album – the remarkable thematic consistency that carries from song to song – also means that there is usually very little separating them from one another. Of course, that isn’t an issue unique to this album as it’s par the course for most albums that carry the tags of ‘atmospheric’ and ‘black metal’ at once. Fortunately, it’s a solid marriage of atmosphere and thickness throughout – no shrill, lo-fi tornadoes of old to be found here.

Which means King of The Silent World is a sometimes kind of listen – it’s likely to be best for the listener if they’re in a mood to experience the bleak. There is a degree of light at the end of the proverbial tunnel in closer “Father, Devourer” though whether that light is a positive or not is very likely to depend on the listener. All manner of predators use light in the abyss and the abyss is exactly what King of The Silent World is a journey through.