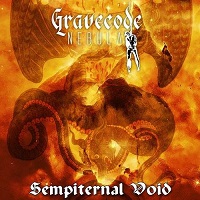 Falling somewhere between the claustrophobic horror of Aevangelist and the dirty, primitive nature of bands like Corpsessed and Grave Miasma, Gravecode Nebula takes the doom-ridden, primal merging of black and death metal and combines it with horrific and hypnotic atmospheres.  Coming off of a 2011 split with Krieg, Sempiternal Void is the Salt Lake City-based band’s debut album.

Considering the album’s six tracks weighing in at just over an hour, and its bleak atmosphere, Sempiternal Void will put most listeners through the emotional ringer.  Thankfully, the band has a knack for changing up tempos and keeping things interesting throughout (the shortest song here is over eight minutes).  Going from slow, funeral doom dirges with weight of the world guitar riffs to explosive bursts of speed, the dynamics are great but the real star is the haunting atmosphere.  In fact, you probably won’t recall many riffs (though the slow crawl and audible bass of “The Frozen Sun” does come to mind) as they more often feel like mood inducers.

There is a bit of an occult feeling here, with some of the growls almost feeling ritualistic at times, with long instrumental segments that do a good job of balancing between being inviting and oppressive.  There is also some help from some synths in designing the eerie feel of Sempiternal Void, with the funeral-esque keys of “Abhorrent Absorbant” (say that five times fast) being a sound example.  They never go overboard with them though, keeping them as more of a supplement rather than a showstopper.

Though the caustic environment Gravecode Nebula induces may not be something to listen to everyday, it succeeds in creating an atmosphere reveling in filth and desolation.  To be able to compose tracks of this length effectively on a debut is worthy of note and should be welcomed by many doom/death fans.