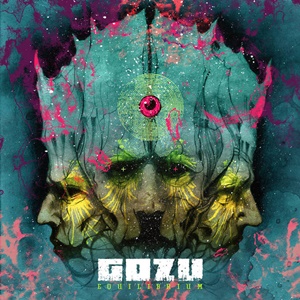 At this point, the playbook for rock and metal is wide open for musicians. Pigeonholing a style may be left to critics who feel the need to categorize bands, but in the end – if a set of like-minded people want to explore multiple sonic outlooks and it makes sense, it’s all the more refreshing and satisfying long-term. In the case of Boston-based quartet Gozu, they’ve built a decent following since their 2010 start, recording a self-titled EP and three albums with Small Stone Records and Ripple Music by sticking to a love of stoner rock, classic rock, and heavy/doom metal. Moving up to Blacklight Media/Metal Blade for their fourth full-length Equilibrium, it’s hard not to get swept up by the slinky, lower-tuned riffs, steady rhythms, and magical harmonies/melodies put forth in these eight tracks.

The first thing noticeable at a surface level is Gozu’s affinity for 80’s television, film, and wrestling/ karate action – especially when you have song titles such as “Stacy Keach”, “The People vs Mr. T”, and the superstar wrestler “Ricky ‘The Dragon’ Steamboat”. The band is all about locking into a musical groove and building the momentum and anticipation up, down and all around – be it a steam roller chugging guitar foundation around this monster Mike Hubbard drum stomp for opener “Ricky ‘The Dragon’ Steamboat” or going more Soundgarden/C.O.C. on you through wah-wah action and distant vocal moans during “King Cobra”. People often fear a monotonous nature to acts that choose slower than resting heart rate BPM’s – fortunately for Gozu, they create enough distinction through their diverse influences song to song to keep you fully engaged, where “Manimal” can be an obvious doom metal cut, but the follow up “They Probably Know Karate” more in that classic/stoner hard rock sweet spot with some southern flavoring in the vocal melodies.

And then there’s the singing prowess of guitarist Marc Gaffney that gives Gozu a few legs up on the competition. Soulful, emotional, and deeper than the average crooner – you can hear everything from Glenn Danzig to Neil Fallon and maybe a pinch of Jonah Jenkins from the much missed Only Living Witness through his phrasing and passionate delivery to highlights like “The People vs. Mr. T” and “Prison Elbows”. Ending the record on an epic note through the atmospheric/psychedelic, almost 11-minute odyssey “The Ballad of ODB” (think Pink Floyd on a strange Black Sabbath trip), Gozu appear content to slide up the ladder of respect and admiration on their own terms – and rest assured audiences far and wide are gravitating to this addictive sound.