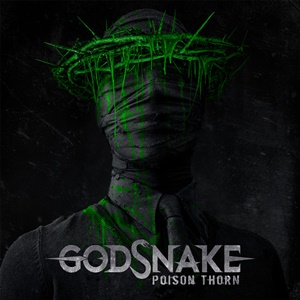 German act Godsnake focus on an addictive blend of power/thrash with plenty of melodic and modern groove elements for their debut full-length Poison Thorn. An obvious blend of influences from the US scene, they’ve been able to tour with Motorjesus across Germany as well as perform at the Metal Dayz and Rock Am Stück festivals and released a four-song EP independently prior to signing with Massacre. The quintet keep the songs sharp and focused, delivering a crunchy, low-tuned guitar foundation and supplement the proceedings with a locomotive, lock-tight rhythm section and vocals that will probably remind most of a southern hot version of James Hetfield during the 1990’s.

The axe play of Stevo and Malt covers all the bases in terms of rhythms, small enhancements, and lead breaks – leading the headbanging charge through crunchy opener “Urge to Kill” (enjoy the subtle circular cultural part around 4:15-4:42) and getting slower and slightly doomier groove a la Hellyeah or Corrosion of Conformity for “You Gotta Pay”. Certain combinations build off a mid-tempo slamming start – where you can tell a love of Trivium pours forth during the title track or the double kick monster “Stone the Crow” where the gallops galvanize the troops. Torger as a singer has a clear command of his delivery and surroundings – intertwining his Hetfield-like rasp with the occasional cleaner choruses that mirror many solid modern hard rock artists. Godsnake aren’t the type of band that will wow you through thrilling musical passages or virtuoso lead breaks – they develop and execute a steady stream of meat and potatoes ideas, sometimes approaching Bay Area thrash influences like Death Angel or Metallica during back half favorite “Blood Brotherhood”. The grey figure with a spiked fluorescent green crown on the cover also establishes a bit of a shift from the normal blood red/skull themes coming down the metal pike for other bands.

Poison Thorn gives Godsnake a chance to establish themselves in a time when people are seeking new bands to entertain them, and hopefully gain a better following so that when live shows return, opportunities will be in abundance.