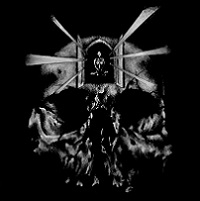 Another band spawned from the deep, eternal void that is primitive death/black metal, Florida’s Gnosis (not to be confused with the Colombian, Ecuadorian, or New York incarnations, let alone the band “Gnostic,” who features Atheist drummer Steve Flynn) are a typical charge for underground purist metal. The production is sucked right between demo and beginner level, the riffs occasionally trudge between Morbid Visions and the first few Bathory albums, and the overall presentation speaks to something far more alluring than the music suggests. The band’s The Third Eye Gate debut may not have much in the ingenuity department, but here’s to letting to roll for the cross-armed, hard-to-budge metal crowd.

The accompanying bio with The Third-Eye Gate suggests Gnosis are hot on the trail of the much-laded early 90s Greek metal scene which included excellent bands like Necromantia and Rotting Christ. Such a line can be drawn when wrangling, earthy, yet extreme jams in the form of “Chariot and the Sun-Moon” and most notably, “Cult of the Great Serpent,” which emerges as the album’s first attempt at moving out of the grim-basic riff doldrums and into something more spacious. The nimble verse riff on “Lotan’s Dwelling” is-a-happening, while the band’s own self-titled anthem “Gnosis” contains a barrage of sidewinding speedpicking and one-armed blast beats.

Played without much attention to perfection (beware: the meter fluctuates throughout many of these songs…lack of click track in the house!), The Third-Eye Gate is a near-promising, but ultimately average showing. If anything Gnosis can be thrown in the bank of like-minded bands whose sole purpose is to recreate the past by aping a certain style and/or scene. As noted, the Greek scene was the target. Sure, Gnosis may eek out a few such moments, but no real need to venture away from the real/first thing in favor of this.