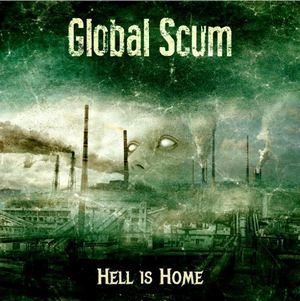 In search of the next almighty groove? It seems you are not alone, as Manuel Harlander, the force behind the one-man act Global Scum, feels your pain. A blend of death and thrash metal, Hell is Home is a remarkably groovy album that leans more in an old school manner than a new one.

A heavy Sepultura/Soufly nod is all part of the fun when it comes to the Global Scum festivities. From the massive emphasis on groove to the barked Cavalera-esque vocals (see “I Can’t Change the Fate”), the influences aren’t exactly subtle. But they are implemented well, and the death metal side comes out when things speed up, tempo-wise (“Disappointed Life”). This moves Global Scum into darker territory, and these frantic moments are visceral and more ‘90s-inspired as well. Despite the rattling of the drum machine, there’s no denying the carnage that Harlander can spread during these moments (“When Water Turns to Blood”). Unfortunately, with an emphasis on grooves, there’s just not enough memorable moments. The tracks all run forward with simplistic structures, which is fine due to the nature of the beast, but there needs to be a reason to revisit the material. Sadly, the grooves work in the moment, but nothing really qualifies as a lasting memory.

There’s elements of straight-forward fun with Hell is Home, but it’s nothing that ends up lasting for the long-term. More often than not, it comes across as run-of-the-mill, which is unfortunate given the moments that spark (the two tracks mentioned above). Perhaps with a bit more blurring between the death metal and groove, Global Scum will become a more dominant force.