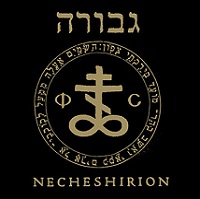 From the cold winter darkness in…Canada? Yes, Canada. Gevurah (comprised of X.T. and A.L.) formed in 2011, having released their first demo in the same year. Necheshirion is the band’s debut EP and I must say, it’s not the black metal-ish quality the most are used to. With a sound that is very polished for the genre, the EP can quality-wise, almost be compared with All Shall Fall by Immortal, although we need to keep in mind that for a reasonable price, it is possible to get a fairly good recording job these days.

With a deep and spiritual lyrical theme, the duo has a spectacular vocabulary. The only slight problem with the lyrics is the fact that most are pointing towards a Satanic/Luciferian style, while in “Divine Ignition” they are speaking of a form of ancient Babylonian mythology, so that can leave one mixed up.

Furthermore, the duo has technical proficiency to boot, combined with tight mixing, which appears to show only one mistake in the awesomeness that it crafts: the ending of “Flesh Bounds Desecrated.” The song, built up with all the strength it has (some even still from the previous song), and the combined essence of it all, ends with an orchestra blasting – a horrifying sound if there ever was one.

The album should have come to a halt with “Divine Ignition,” but “Entering Timeless Halls (Malign)” is sort of without use; rendered meaningless when taken into the grand context of Necheshirion. A pleasurable listen nonetheless.