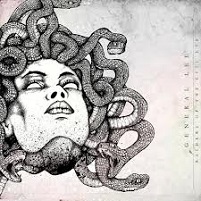 Those Duke boys…always up to something. The beauty of The Dukes of Hazzard (aside from its awesome opening credits) was the show’s ability to include a car

chase in every episode. Magically, a dirt road would appear for Bo and Luke to give chase to the bad guys, all the while the Hazzard County police department was several legs behind. But, wasn’t strange how whenever the bad guys got a significant head start, the General Lee would always track them down? That’s 80’s television for you; about as realistic as they come.

Odd that a French sextet bears the General Lee moniker, for Blistering opened these files with one eye closed, thinking it was yet another backwoods sludge band. Instead, General Lee is a post-hardcore ensemble, playing in the vein of the always-cult Botch, and even more cult Neurosis on their third album Raiders of the Evil Eye. It’s an amalgamation that doesn’t happen enough, so when the Frenchman go from a spate of vitriolic, pit-stormers like “Medusa Howls with Wolves” and “Alone with Everybody” to the atmosphere gaze of “Overwhelming Truth,” one must ask themselves why more bands don’t give this a go. It sure does the trick for General Lee, as this back-and-forth keeps the album’s seven songs resoundingly fresh and buoyant.

point may be the fact they have three guitar players, but that’s pretty much a moot point thanks to the sonic plasteringRaiders of the Evil Eye dishes out. The only thing that could hurt these lads is confusion over their name, for everyone on this side of the pond associates the General Lee with either the Confederacy, or being a country bumpkin…and the marvelous Daisy Duke, of course.