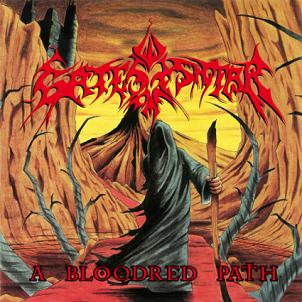 The fever for the Gothenburg melodic death metal scene has subsided considerably over the years, perhaps because most folks are either satiated or now totally immune to its core sound. The advent of melody imbued into otherwise brutal music was a brilliant stroke of brain power, drawing in those who normally wouldn’t give death metal a passing glance. When the century turned over, the scene’s upper-tier (led by In Flames, with Arch Enemy, Dark Tranquillity and Soilwork in tow) appeared to be poised to carry metal for an unforeseen amount of time. Then metalcore happened.

Rummaging through the scene’s second or third-tier bands has always reaped rewards, however, including Luleå’s Gates of Ishtar. Formed right as the scene was starting out, the band’s A Bloodred Path saw release via Spinefarm in 1996, staking out its territory as a harmony-happy, distinguished effort. Even though Gates of Ishtar never quite progressed beyond cult status, Vic Records is giving A Bloodred Path another release. There are no bonus or lost tracks tacked on, but A Bloodred Path still holds its own over 20 years after its release.

Characterized largely by its constant cascade of melodic, hyper-Maiden guitars, Gates’ whipped a handful of mini-gems here, most notably the blinding opening instrumental “Inanna,” as well as “The Dreaming Glade,” which brings in touches of atmosphere. Additional highlights include the frenzied “When Daylight’s Gone” and a cover of W.A.S.P.’s “I Wanna Be Somebody,” reminding us all how much Swedish bands fancied American hair metal.

How and why Gates of Ishtar never advanced to the next level is anyone’s guess (methinks it was because of lack of promotion). The reissue of A Bloodred Path, though, is a stark reminder of the potency of the mid-’90s Swedish melodic death metal scene.