Gaskill – The End of the World (Self-Released) 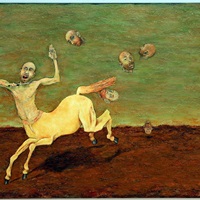 New Bedford, MA band Gaskill has been delivering original music since 1995 – sticking to their guns through self-perseverance, a significant break during the late 2000’s and natural lineup changes- as well as caring less about fitting in to the latest trends or ‘hip’ styles in heavy music. “The End of the World” illustrates a raw, abrasive sound that is part punk, part hardcore – yet definitely sturdy enough to keep itself in the metal category.

The evil guitar sound is one that put bands like Pro-Pain, Life of Agony, and the much missed Only Living Witness in the hearts of a lot of fans during the 1990’s – the riff swirl striking mammoth, pit worthy proportions off the “Worms” get go. Highlights range from the psychedelic crossover groove throughout “Long Lost Friend”, the Sam Black Church-ish meets Slayer maniacal quick hitter “I’m Not Waiting” (102 seconds of blood bursting activity) and the thrash thrust and parry between guitars and rhythm section action for “War and Knives”.

The ace in the hole definitely is singer Kevin Grant. To put his take on what he does for Gaskill in a few words can be difficult – the man is a chameleon in a punk/ hardcore / metal montage. The melodic aspects of his voice fluctuate between Glenn Danzig and old Keith Caputo, while his screams and punk ways are 100% native to the New England scene – fairly equipped to add some SBC, OLW, and a host of others reference points from the rich history of the local movement. He’s very tuneful during Gaskill’s take on “Eleanor Rigby”, as well as psychotic in certain screams and warbles for “Dog Heaven” – certainly memorable when taking these tracks to the streets for live performances.

People who purchase The End of the World get a nine song bonus album – Gaskill tackling the classic Black Flag record My War. Wow that record is now 32 years old… but stylistically fits with its punk rooted A-side and Sabbath-heavy, longer B-side material to the band’s openness in crossing genres to make things work.

Kick out these jams…