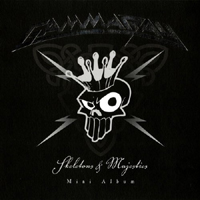 Must be nice being Gamma Ray. Because of their long-standing status as power metal progenitors, they’re now afforded to do fun projects as Skeletons & Majesties, which is a mini-album of the band’s more unheralded songs, which apparently, there is a bevy of. Basically, this is something for the band to promote in lieu of their upcoming European festival run. Smart move, gents.

Anyway, “Hold Your Ground” (from the band’s Heading For Tomorrow debut in ’89) and “Brothers” (Insanity and Genius, ’92) do quality as “skeletons” (as indicated in the liner notes). Neither match the Teutonic muscle and bombast of the band’s main tracks, although “Brothers” has the necessary cheese factor to push it across the brim.

The real treat here is an acoustic version of “Send Me A Sign,” which originally appeared on 1999’s Powerplant. Perhaps the band’s best song, “Send Me A Sign” in acoustic-form is anthemic of a song as they come, and is a live staple for the band. “Rebellion In Dreamland” (from Land of the Free) also gets the acoustic workout and is of significance because it was the first vocal appearance mainman Kai Hansen made on a Gamma Ray album. Bonus tracks include the throwaway “Wannabees,” an extended version of “Brothers” and a karaoke version of “Rebellion In Dreamland.”

Like Helloween, there are no evident signs of wear-and-tear in Gamma Ray.Skeletons & Majesties is a cool idea, showing how deep the band’s catalog is, although the real gems will forever lie in albums like, Land of the Free, Powerplant and of course, No World Order. Go get ‘em, Kai.