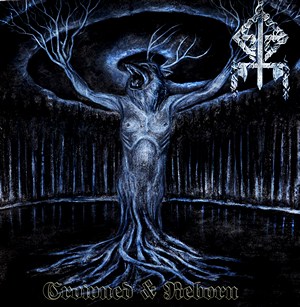 Often, when one hears the tag ‘black/death metal,’ it comes in two flavors – the first being a symphonic variety with synths and the like, and the second being one that often feels more death than black. Gam doesn’t really fall into either of these two camps with their debut, Crowned & Reborn, instead they make the inclusion of both genres and one can easily pick out the pieces of either as the album progresses.

At points, Gam is lathered in blackened riffs, buzzsaw melodies, and faster tempos – their blackened origins are easily discernable, even if most of the vocals are of the more deathly and growled variety. But then a more vicious approach is detected with death metal aggression – leaning more on the ‘90s variety (a la Deicide) than anything else. The riffs turn heavier and more impactful, and the way that Gam switches back and forth between the two sides is really what’s most important here. They do quite a good job of not only balancing the black and death influences, but they also seem to grasp when it would be a solid time to transition, and work in something effective to bridge between the two without it feeling forced or awkward. This makes for a listen that never stops being malevolent and heavy, but also one that never feels one note or limited. Some small melodic inserts pop into play as well (see “An Orgy of Flesh”) and they also never impede the more brutal atmosphere and tone.

While it thoroughly plays into what the black/death genre is all about, Gam earn some style points for being able to truly infuse them both into the mix and bring in some excellent transitions between the two styles. Those looking for something that manages to stay brutal, yet interesting, can’t really go wrong with Crowned & Reborn.