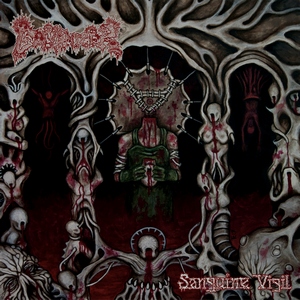 The latest entry into the old school death metal worship competition is that of Finland’s Galvanizer. A few demos and an EP under their belt, Sanguine Vigil marks their full-length debut for Everlasting Spew. A competent release for sure, and what it lacks in originality it makes up for in spunk and energy.

It doesn’t take more than a few seconds to hear (and then predict) the onslaught that is coming. It’s clear that Galvanizer loves the HM-2 sound, but for what it’s worth, they’ve done a masterful job of recreating it. The riffs are so chunky and filthy that you can’t help but love them as you hit each track. Aiding them also is that they do swing outside of the usual Entombed/Dismember/Grave tract and instead accelerate into a death/grind feel that one could associate with acts like Nasum. Unfortunately, the end result still feels a bit played out from the originality side, but Sanguine Vigil is all about maintaining the highest level of energy possible with these songs. You have some absolute rippers, oozing with blastbeats (see “Gorefestation”) that have intensity to spare. The type of material that simply knocks you back and makes you say “whoa.” But even in more controlled spaces, like the title track, they dish out some enjoyable melodies and mid-tempo groove to keep you interested.

It may feel a bit familiar as you hear it, but there’s still no denying that Galvanizer understand the old school death sound inside and out, and are quite capable of taking it to some grind-y extremes. The energy level is off the charts, which means that genre fans will surely get a thrill from it. But one hopes that they may take the grinding side a bit further to differentiate next time around.