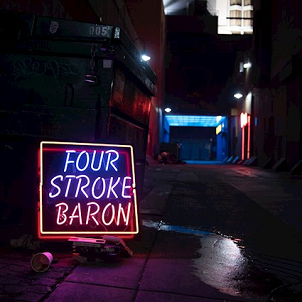 With a singer like Kirk Witt, Four Stroke Baron isn’t going to be a one-size-fits-all band. Witt, who has unbelievable range and a timbre that some folks online are harping as reminiscent of Tears for Fears (they’re not incorrect), is, obviously, one of the last of an ever-rarefied breed of “singers,” dudes capable of carrying a tune when necessary. On the band’s second full-length and first for Prosthetic, Planet Silver Screen, the Reno, Nevada power trio is a heavy music amalgamation that borders on prog, but is all catchy, a lot of that having to do with Witt.

The album’s title track, launching into matters after a quirky instrumental by the name of “Cut,” is spinning, sometimes dizzying affair, but eases into a sunny chorus from Witt (who also doubles on guitar), who sings about his love for California. It’s an easy vocal hook to like, leveling the playing field for the ensuing “Neon Person,” a cut highlighted by simple, but driving riffs. Further dives into multi-dimensional realms comes via “A Matter of Seconds,” which work in dissonant riffs and a confluence of layered, echoed vocals from Witt. New wave nuances get a go on “7th of July,” which, of course, makes this scribe and any metal dork think of the King Diamond song with the same date, but Four Stroke Baron, instead, unfurl another whirling, groove-monster with Mastodon-like riff elements. Lest we forget about the guest appearance from Shining’s Jørgen Munkeby on “Video Maniacs.”

Perhaps much to the chagrin of metal journalists everywhere (not this one, though), Four Stroke Baron are without a proper subgenre home, operating in their own self-contained bubble which also includes some crazy visuals, as demonstrated in their promotional videos. An arena-sized, panoramic hybrid with limitless possibilities, Four Stroke Baron are likely to be the next odd-ball metal favorite.