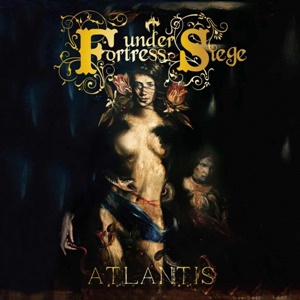 A consistent purveyor of power/progressive metal bands since this scribe’s tape trading heyday of the late 80’s/early 90’s, another Greek act comes to the mix with the sextet Fortress Under Siege. Atlantis as their third full-length, and first in six years, sees a few lineup changes in the group. Most notably adding guitarist Themis Gourlis while shifting former guitarist Tasos Lazaris into the vocal slot. This twelve- track effort showcases a sound and style that contains plenty of soaring vocal melodies, catchy rhythms, and solid hooks while being very entertaining and dynamic for those who live for power/progressive metal.

Early on the record the band flash more of their straightforward metal penchant, the axe work of Fotis Sotiropoulos and Themis Gourlis electrifying with the right clean to heavy transitions, giving bassist Alex Stavrakas open space during the verses for “Love Enforcer” to enhance the subsequent bridge/chorus work. Orchestration/keyboard supplementation from Georgios Georgiou supports the subsequent headbanging riffs and upper pitch notes that Tasos easily sustains in a Michael Kiske/Rob Halford montage for front half album highlight “Lords of Death”. When the band wants to they are able to spice things up with exotic, epic strains of a slower to mid-tempo versatility, or be a little more progressive in the parts, as “Silence Of Our Words” contains some semi-jazzy movements from the bass/keyboard angles against its natural driving riffs, a song more in line with say Mob Rules or Poverty’s No Crime than what would be typical in this style. Iron Maiden gallops penetrate the aptly titled “Seventh Son”, Tasos again giving a powerhouse premiere performance from his multi-octave, lower to higher range convincingly just like the best metal singers in their prime. Ending the record on a moving quiet to power ballad transformation for “The Road Unknown”, it’s evident and obvious these musicians have a firm grasp of the power/progressive metal mix they wish to encompass, always keeping things dynamic and melodic track to track.

Hopefully this lineup for Fortress Under Siege can stay together – as Atlantis contains ideal material to build upon and make a mark if you love European melodic power/progressive metal.