Unfortunately, the French-Canadian black metal boon never quite took hold. As per habit, we, along with other devotees, were looking to hitch our wagons to a new BM sound that wasn’t Cascadian, infested with sludge, or, backward and/or primal. In turn, all signs pointed our friendly neighbors to the north, who very quietly (how Canadian!) have been going about their own business in the black arts, producing a handful of high-quality bands like Sombres Forêts, Gris, and the band in question, Forteresse. However, none of them have yet to stage a true scene infiltrating album. Perhaps one day, eh? Now past the ten-year mark as a band, Forteresse have turned in their first proper full-length in five years in the form of Thèmes pour la rebellion.

There’s a certain dynamic value to these French-Canadian bands, in part, because they aren’t precedent-huggers. Naturally, there’s some scooping from Norway, in particular, when matters get brazen, but, the manner in which Forteresse combines atmosphere with the various cuts, angles, and side-views of BM relevant to their home country, is all on them. In turn, the snaking “Là où nous allons” works its way into a titanic rush near the song’s conclusion. “Le Sang des héros” may do one better, a sterling testament to the guitar work of Moribond, who proves that he’s the band’s most valued asset, a skilled, uncanny player who as you would expect, follows no rules and guidelines.

You’re not going to get the same mournful or epic-soaked flourishes that come out of an album from Sombres Forêts and Gris, yet Forteresse have, if you will, more thunder and/or fire to their sonic arsenal. With that in mind, Thèmes pour la rebellion is a worthy, flame-throwing effort, that while not a game-changer, is a stark reminder of where some of the most unique black metal sounds are coming from. 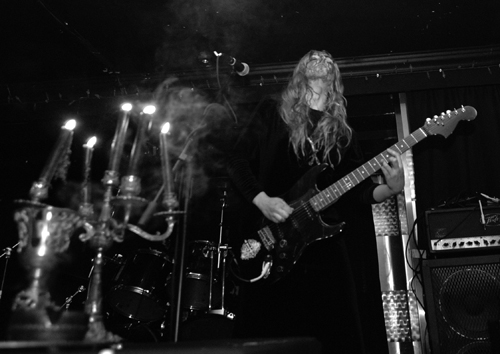