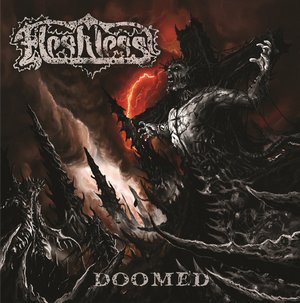 With the volume of bands out there, it so happens that sometimes a band or two gets lost in the shuffle. Not having checked out Fleshless since their early days in the late ‘90s, Doomed served as a reintroduction of sorts. For one, expecting something more death/grind in tone made Doomed a quite pleasant surprise. While brutality was expected, the number of melodies that are also there simply added to the charm.

After a brief intro, Fleshless rips right into “4th Dimension” with all of the fury that you would expect from a death metal act. But as the song progresses, there’s more melodic flourishes that creep out from under the woodwork. Fleshless continue the remainder of the album in this same manner, as they hit mostly mid-tempo and blasting segments with ease, keeping them a bit more memorable than you might expect due to the way that they weave things together melodically. There’s a subtle art to what they are accomplishing, as there’s not a track among the bunch that lacks for something sneaky on the melody front. While there is a bit of blurring as the album progresses (a common problem within the brutal death scene), it doesn’t become as overwhelming as it could have because of this. But in the endgame, Fleshless are all about providing some auditory punishment, and the blistering riffs are exactly the type of thing that never gets old in the scene.

Utilizing melodies in a way that enhances a brutal formula, Fleshless have more bark to their bite than you might think from the start. This is death metal to the bone type of stuff, but the efforts to make it memorable are noted and truly appreciated.