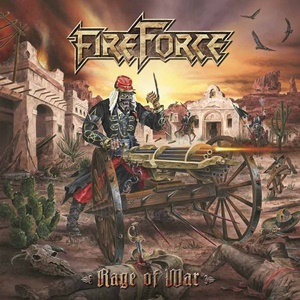 Touring does wonders for certain musicians. While on tour with Nightmare a few years back, Belgian power metal act FireForce made quite the impression for Nightmare guitarist Matt Asselberghs – enough to become the vocalist/guitarist in this unit. Allowing Matt to settle in, main guitarist Erwin Suetens handled the bulk of songwriting for Rage of War – also grabbing solid behind the boards work with R.D. Liapikis/Bob Briessinck as producers and Henrik Udd for the mixing and mastering duties. The vinyl and CD versions have ten tracks or twelve depending on which you pick up – both with some exclusives because of the productivity and quality of the material.

Right away you can tell FireForce are a veteran act knowing where to emphasize the trademarks of power/traditional metal: the record chock full of catchy songwriting, varied tempos, and rock hard riffing with proper supplementary guitar melodies and focused choruses. Intertwining angles of Iron Maiden/Judas Priest with other European brethren from the 90’s/2000’s like Rage, Blind Guardian, and Mystic Prophecy, you can expect speedier, charging outings like “Firepanzer” and “108-118” where the guitars and vocals have blitzkrieg appeal just as easily as a mid-tempo steady anthem track like “March or Die” or the calmer, semi-ballad “Forever In Time” which allows Matt to develop some of his lower range strength and emotional magnitude. R.D. as a producer really worked hard to set Matt up in the best situations – as he isn’t quite at the say Ralf Scheepers/ Rob Halford eagle high scream capacity, but his grit and determination make the opening title track plus “A Price to Pay” memorable, the latter containing some killer triplet/progressive drum parts from Christophe De Combe. The vinyl exclusive “Tales of the Desert King” has that epic, marching template and semi-exotic/militant main musical hook – listeners transported to desolate sand, searing heat, allowing a perfect end for that format.

Rage of War is easily the strongest FireForce album to date. Now gaining Matt as a vocalist/guitarist will probably expand the appeal of the band, and probably their creative horizons with multiple songwriters down the line. Those who love power metal, straight ahead heavy metal, and a mix of classic influences with other strong headliners from the 90’s/2000’s European scene will need FireForce as a part of their listening experience.