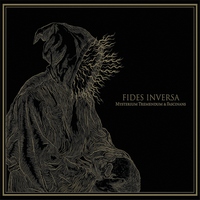 In the past week I’ve covered blasttacular black metal and slow and methodical black metal and now at last I find myself in the ‘just right bowel of porridge’ black metal. Sometimes dissonant (like Deathspell Omega) other times symphonic (not like Dimmu Borgir) and often playing to a direction all its own, Fides Inversa, an Italian group with a thing for Latin and theatrics have unleashed Mysterium Tremendum et Fascinans (a mouthful and a half), a stellar kind of experience for the many things it gets right.

Peaks and valleys, dynamics in motion and the oscillations between the tremolo and blastbeat prone and almost doom-like passages highlighted by backing strings, missing only forays into clean vocals. Nameless songs make this a kind of continual concept album though as to what that concept may be is admittedly lost on this listener. The old school mentality pervades works like “II” and a greater hand for experimentation, texture, and even choral backing dominates pieces of the over 10 minute works “IV” and “VII”. To be varied can occasionally be the most profound of trespasses within a genre whose base is so resistant to change but the variety of flavor across Mysterium… is nothing short of fantastic.

And this helps with digesting the album as rather than being 51 minutes at one pace, be it glacial or on fire, the album flows with a smoothness rarely experienced. The songs flow with ease between one another and yet still retain identity when taken out of the album individually. A surprise release if I’ve encountered any this year (admittedly there have been many) for genre fans and lovers of the extreme alike this is likely one of the better sleeper hits of the Fall.