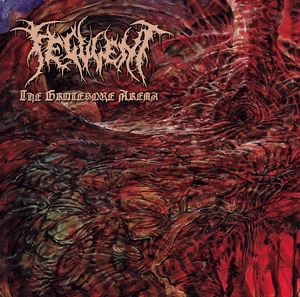 A new Australian act featuring members of Snorlax, Resin Tomb, Descent, and more, Feculent is just as grimy and filthy as the grisly cover would imply. Another introduction by way of EP, Feculent present a small offering in The Grotesque Arena that is rather corrosive in its execution and uncompromising in extremity.

Taking a brutal death metal formula and merging it with some doomy dirges (a la Incantation of course) and slight traces of black metal, Feculent go for a rotting, festering sound. A pleasantly dirty sound is a fitting one though, and adds to the feeling of chaos when the band accelerates into faster speeds – offering a more jarring and disorienting feel without sacrificing the music into pure noise. A doomy tempos it manages to stay just as uncomfortable and gut-wrenching albeit in a different way. “Beneath Bedlam” crawls along like a zombified corpse, emphasizing the riffs putrid tone along with the horrifying growls. Which then allows follow-up “A Perverse Spectacle” to knock you back a bit with a blastbeat-driven opening as the band flies forward with devastating momentum. It’s these sort of shifts that work best for the band, and later grooves in said track only add to the sheer heaviness of the experience.

It’s nothing outside of the beaten path, but The Grotesque Arena is none the less a putrid piece of extreme metal that many should find appealing. The grimy, occasionally cavernous but always oppressive sound is the key to Feculent’s sound so far. With more music behind them, it may lead them to even darker or more disturbing levels.