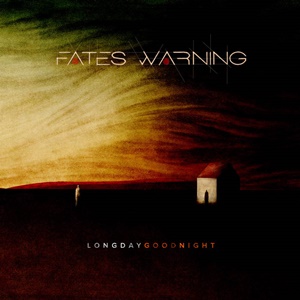 Fortuitous times for Fates Warning these days. Both the John Arch and Ray Alder periods of the band have received accolades as of late – the former celebrating the 30th anniversary of Awaken the Guardian with memorable festival shows in Germany and Atlanta, while the latter gained critical acclaim for their latest two studio records, Darkness in a Different Light plus Theories of Flight. Approaching Long Day Good Night with renewed confidence, main songwriter/guitarist Jim Matheos delivers a wider scope of material that embraces the progressive metal platform with sometimes softer textures, occasionally atmospheric, as well as full force modern finesse that will be happily dissected and devoured by the faithful.

The mixture of shorter, focused cuts and occasional longer arrangements ensures that while you have a lot of ideas to digest, you will not feel exhausted at the versatility and fruitful melodies and hooks that sprout forth. Be it more eclectic/spacious in the bob and weave guitar parts for “Shattered World”, the slower, emotive calmness from the music and vocal combination during the early stages of the shapeshifting 7:42 “The Way Home” ( sick, sinister cymbal/time signature percussion madness from Bobby Jarzombek at the 2:30 mark onward) or the Parallels-ish nature of “Liar” that puts Ray Alder into heartfelt mid-range heaven with ideal vocal harmonies for singalong retention- these gentlemen know how to get the most bang for their execution. “The Longest Shadow of the Day” at 11:29 as the longest song features intriguing Pink Floyd-ish / jazzy picking and Joey Vera pushing his bass prowess to the max, musical technicality phrasing that has to be heard to be believed, a calmer vocal-driven middle before the heaviness kicks in again, proving Jim and the boys haven’t lost any ability to write, create, and deliver longer songs that keep your attention from start to finish. Glad to see live touring guitarist Michael Abdow get some lead work on three songs, as he also has key, seasoned abilities that shine.

Ending on an interesting note with the acoustic-driven “The Last Song” that hints as the possible ‘final’ studio effort for the group (‘the winter beginning, the writer writes his final song’), Fates Warning have a fine discography to pour through – and Long Day Good Night will be another record that stands up well for most followers of this premiere progressive metal outfit.