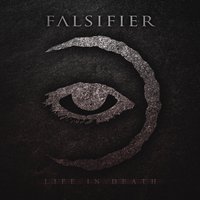 With a recent signing to Artery Recordings, Falsifier’s stock has gone up following two self-released efforts. Life in Death being their sophomore effort, the band finds itself among the other downtuned, heavy-hitters that the genre has to offer, such as The Acacia Strain or Black Tongue. If you are familiar with the approach, don’t expect Falsifier to offer up anything you haven’t already heard before.

The appeal of bands like these mostly stems from their utter heaviness (and downtuning). On that front, Falsifier delivers exactly what you are looking for. Simplistic riffing structures with massively heavy sounds dominate the landscape, and provide the band with ample opportunity to throw in breakdowns sure to incite a riot. The vocals are your go-to throaty growls, and the lyrics fit into the “toss it on the back of a t-shirt” variety. Very to-the-point and abrasive. If that is all you are looking for, Life in Death will certainly give you a few thrills. But looking at it in an objective manner, nothing really happens as you move from beginning to end. The riffs, due to the downtuning, lack any sort of identity and the breakdowns are simply there to chew the scenery. Most of the EP sticks into the mid-tempo range, again making the EP feel like one long blur of a song. The attempt at atmosphere works for the first track, but then it becomes painfully clear that this is the band’s approach each time atmosphere is employed and it loses it’s luster.

Life in Death fails to cover any new ground, with the aforementioned bands doing a stronger (and more varied) attempt at this particular style. With a signing to a larger label like Artery, one has to hope that the band is going to step up their game significantly with their next offering. Being “heavy” can only take a band so far.