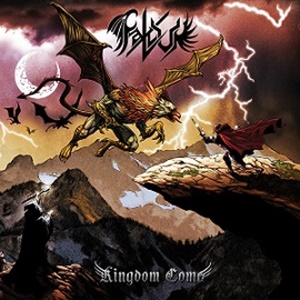 Delivering heavy metal with tried and true themes of fantasy, sci-fi, and the daily grind, Falcun come from India – probably not the most well-known countries for metal exports, but they’ve developed a potent scene that supports international touring/festival action. Unsure of their year of inception, the quintet hit upon a traditional heavy metal sound that’s very much rooted in the classic 1980’s scene for this debut album Kingdom Come. It’s easy to know that you’ll get frantic lead action, twin guitar refrains that often subscribe to unison vocal activity, and a rhythm section that gallops to the pace of proper NWOBHM cronies in that semi-progressive / push and pull manner we’ve grown accustomed to expect.

Bassist Nilavro ‘Rony’ Ghosh has as much a part of the sonic attack for Falcun as the guitarists – his Steve Harris’-like pumping action a key component in the musical foundation of “Only Be One” and the racing “Eye of the Storm”. It’s pretty evident throughout that Iron Maiden would be the number one influence for the group – but there are also spots where Judas Priest, Riot, and Saxon factor into the mix as far as phrasing, mood, and feel. Many of these songs traverse longer than normal arrangements, giving the musicians ample showcasing of their instrumental skill sets which can go hand in hand with the genre – be it a prolonged, bombastic ending or shape-shifting lead breaks against a catchy refrain. One of the longer songs “Martyr” at 8:08 contains a reflective acoustic opening before moving into a doom-like effort that Sabbath fans would be proud of… if not for the wildly erratic melody lines from singer Abhishek Dasgupta.

As far as a natural register and inflection ability, Abhishek can mimic many qualities that could bring Bruce Dickinson recall. Unfortunately, when he chooses to hit those bird-call, air raid siren highs – he sounds very unsure and wavering, as if ready to fall off a ten-story building into a moat of alligators. It’s a shame because it brings down the twin harmony guitars and musical excitement of tracks like “A Bard’s Tale” and “Child of Prophecy” (the ending of the latter especially tough sailing). The cover contains relevant fantasy/mystical content – giving the proper glimpse into what you’ll expect once you put this on. In conclusion, Falcun still have some growing pains to shed before more international audiences will take them seriously.