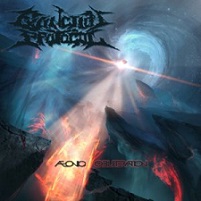 We don’t hear much from Erie, PA, the city best known for being smack-dab in the middle of the Snow Belt, along with owning the distinction of having three football teams (Bills, Browns, and Steelers) fighting for its affection. It’s a blue-collar town that generally produces hardcore or really bad nu metal bands, so the lads in Extinction Protocol must be totally immune to what’s going on their place of residence, for their Aeonic Obliteration debut is one combustible piece of technical death metal.

Fairly fresh in terms of age (they formed in 2010), Extinction Protocol pulls from the familiar array of technical death metal giants – Suffocation, Cryptospy, and on a chunkier basis, Cannibal Corpse. The band’s riffs are utterly savage at times, like on opener “The Merging of Titans,” which features some killer harmonic work to go along with the resourceful playing of drummer TJ, who proves that you don’t have to be all blast all the time to make things extreme. A number of these jams push the American tech-death envelope, like “Chained to Oblivion,” where Azagthoth-like guitar builds fly around with reckless abandon. Let’s not forget the chaotic “Heir to an Apocalypse,” as well as the churning “Arrival of the Black Sun.”

Designed almost perfectly for the imaginative lot of the death metal sector that knows no limit when it comes to elaborate playing, Extinction Protocol have a winner on their hands with Aeonic Obliteration. Hard not to back something played with such ferocity and craftsmanship. The best thing to come from Erie in a long time.