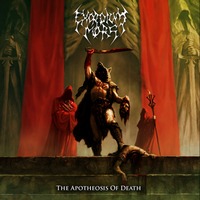 This is a fine example of why you should never judge an album by its cover. With its power-metal-like artwork, devoted black/death metallers might deviate away from this at first but all should know that New Zealand’s heavy, thrashy, blackened death metallers Exordium Mors’s first full-length album, The Apotheosis of Death, is fantastic all throughout and doubtlessly worthy of attention.

Exordium Mors define warfare the way it’s supposed to be – violent, chaotic, barbaric, bloody and deadly with ten songs of blood-shedding, metal-shredding carnage divided into two equally diabolical parts. All the titles, as anyone could see, are quite poetic and the songs themselves very remarkable. The sequence sustains the same level of raging heaviness but every song is unique. Combining consistency with variety is an ideal formula for any album.

“The Corpse of your Divinity Now Burns” is reminiscent of primitive black metal with the addition of old-school war cries tossed in here and there. The manner in which he barks the title in the beginning of the song is much like how old Von was but the high-pitched war-cries are blatantly from a completely different field, it almost doesn’t blend but we’ve got to mix it up every now and then regardless! Going on, everyone knows vultures are lured by the stench of dead rotting flesh and if they liked music it’d more than likely be death metal. “As the Vultures Descend” is a great piece with an evocatively foul title to match it. “The Purging Storm of Chaos Unfurls” has a particularly epic intro that swells into its own full-blown chaotic storm. “Ascension Through Vanquished Flesh” is hateful as hell and “Blade of Brutus” is brutal as fuck thanks to those killer gutturals.

Step one: shove Exordium Mors’s The Apotheosis of Death into the stereo. Step two: grab a hammer or sword. Step three: strike the closest wall with all your might! Now, don’t really do that unless you can cover the damage but when an album as dangerously violent as this comes around, hammers really do end up in walls. We’re spreading mayhem like wildfire right here.