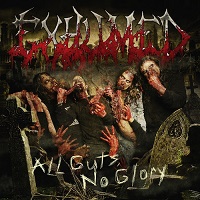 Has it really been eight years since Exhumed released Anatomy is Destiny? It’s amazing how quickly time flies by but then again, to an Exhumed fan, eight years probably seems like three decades. For a band that burst onto the scene and almost single-handedly resurrected the bloody gore/grindcore scene with three acclaimed albums, Exhumed certainly have a lot of catching up to do. Their unexpected delays due to band members leaving and other circumstances left the metal world puzzled because Exhumed was reportedly working feverishly on a follow-up to Anatomy… though the new material at the time never officially surfaced on a full-length (some songs appeared on a few split EPs).

Enter All Guts, No Glory almost a decade later and what the extreme metal world is treated to is arguably the Californians’ finest hour. Sporting a much cleaner sound than their first two efforts (Gore Metal and Slaughtercult) and a meatier, rawer sound than Anatomy…., All Guts, No Glory runs on all cylinders from start to finish. Anybody who feared that Exhumed may have spent the last several years fine-tuning their abilities to recreate a modern Heartwork or become some progressive and/or technical finesse band can rest assured: this new slab of gore metal is all Exhumed, at all times.

Exhumed keep things rather primitive as it is vintage gore metal in the vein of, as usual, the best era of Carcass. While founder Matt Harvey has probably grown weary of the constant comparisons to the legendary British outfit, the musical similarities are overflowing and undeniable. The new record sounds like it could fit snugly betwixt Symphonies of Sickness and Necroticism: Descanting the Insalubrious, but it’s not as elite as either, especially the latter of Carcass’ albums.

The comparisons aside, this is a review of the new Exhumed album and not a side-by-side breakdown of two different bands from two different eras. All Guts, No Glory is mostly delivered at a breakneck pace, though there are some slower, crunchier elements to it as well. The album kicks off with the title track, a sinister 90-second instrumental that paves the way for what’s to follow. From there, it’s a mixture of everything Exhumed has released throughout their career and more.

The album as a whole is a swirling, grinding assault on the ears. The guitars and bass are just as raw and nasty as they are polished and distinguishable, something that many of today’s death metal bands can’t figure out how to pull off properly. The drums are punishing, furious and thunderous; the bass drums in particular are thick and loud (luckily there isn’t that annoying tinny, clicking sound from most of the Pro Tools-produced albums of today). And the dueling vocals of Harvey and Del Muerte offer the perfect yin/yang of the deep guttural Bill Steer style and higher, raspier Jeff Walker type.

There isn’t a bad song in the collection, but the three standout tracks are the triple attack of “Distorted and Twisted Into Form”, “I Rot Within” and “Dis-Assembly Line”. It’s on these tree songs that showcase how catchy Exhumed can be amid the whirlwind of blistering speed and slower crush that most bands of this ilk simply cannot produce as efficiently.

In the end, All Guts, No Glory is a fantastic comeback album and one that no fan of the band should be without. It’s not perfect (some of the faster songs tend to sound too alike) but it certainly does continue the surprising tradition of terrific death metal albums being released in 2011. Some fans might argue thatGore Metal is still their best; others might counter with the cleaner, more accessible Anatomy is Destiny as being their grandest to date. However, All Guts, No Glory coalesces the best fragments of each of those as well as the finer points of Slaughtercult together into what truly is their crowning achievement thus far.

If this new album is any indication as to what’s to come in the future with this lineup of Exhumed, there’s no question that their version of Necroticism is just around the corner. And coming from this reviewer, that’s high praise indeed.