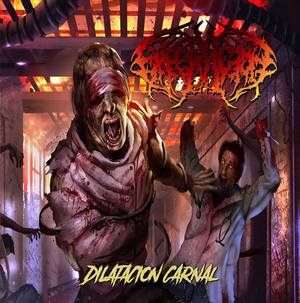 Who says that you can’t bottle up the essence of a sound and then save it for a few decades or so? Bands have been doing it perpetually with the Stockholm sound and other varieties of extreme music for quite some time. But if there’s a type of death metal that does seem to be a bit more on the ignored end of this, it’s that brutal, early-to-mid ’90s American death metal that bands like Cannibal Corpse championed. But Execración is here to give you a dose of said nostalgia.

With much of the album’s sound planted firmly into that particular era of death metal, Execración aren’t really out to show a new or nuanced version so much as just go for the gusto with a formula that shouldn’t be escaping the memory of anyone (all the way down to the tin can-sounding drums). In fact, there’s even a solid cover of Cannibal Corpse’s “Pulverized,” just in case you needed to really be sure of what they were going for. That said, the music behind them checks all of the necessary boxes with style, even if you’ve heard this a few times before. The speeds tend to switch between blast-fueled chaos and some more chunky mid-tempo pounding, and with songs that tend to stick around the 2-3 minute mark, things are almost constantly on the move. But the short run time also has its advantages as it’s enough time to get you enjoying the grooves and furious riffs but it doesn’t end up feeling repetitive and overdone.

While no surprises await on Dilatación Carnal, Execración pull no punches in reminding the listener why the ’90s brutal death metal sound was a successful one. Even here in 2018, there’s still a place for that ‘go for the throat’ gusto, particularly with plenty of bands just trying to outdo each other with tech-riffs. Execración instead places the emphasis on brutality, which always conquers in the end.