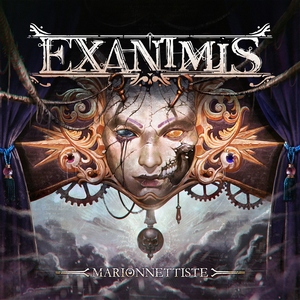 With bands like Fleshgod Apocalypse, Septicflesh, and Carach Angren all taking their extreme metal and mutating it near the point of a cinematic soundscape, the borders have been pushed pretty well into epic grounds in the last decade. Symphonic elements can be grandiose, but care has to be taken to ensure that the heavy metal needs are also met. This is an area where young act Exanimis are flexing some serious muscle with their debut.

Exanimis are nothing short of ambitious when it comes to their songwriting. They pull from the three bands referenced above for sure, but they also tip into some further progressive elements alongside some occasional gothic Danny Elfman vibes in the symphonic elements. This all makes for a very adventurous sound, and one that keeps the listener gripped for as long as the song has to take (“Cathedral” weighs in at over 16-minutes). It’s what the band does with all of this extended time that makes the music stand out. The symphonic end is entirely integrated to the band, and they take great care to ensure that it has some dominating moments as well as some more subtle ones. “Cogs, Gears, and Clockworks” has some thrilling, bombastic segments, but it can also drop the hammer and deliver some punishing death metal when the time is right. Add in some excellent guitar noodling toward the song’s ending and you can start to imagine how they can stretch these songs well over ten minutes without concern of boring the listener (or overstimulating them). The cinematic qualities that permeate the music can range from the gothic eeriness to more horrifying and aggressive, and even toss in a quieter atmosphere from time to time while keeping the song moving ahead (see “The Slow Flow of the Spume on the Shore”). It’s an added flavor, and keeps the death metal beneath feeling a little more extravagant that the norm – a win/win for sure.

An entirely impressive debut, Marionnettiste champions a progressive yet thoroughly cinematic and immediately satisfying piece of extreme metal. With one release, Exanimis have proved that they can stand shoulder to shoulder with some of the best in this genre.