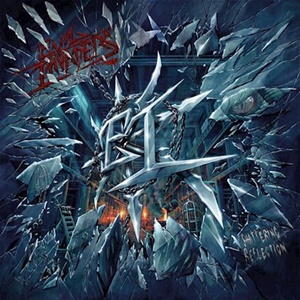 While bands have a lifetime to create their debut record, usually subsequent outings need to be written and recorded in a quicker fashion – obligations from terms in a label deal to being road warriors main factors at play. Which makes the third record in a career crucial – often vaulting an act to classic status (The Number of the Beast, Reign in Blood, Master of Puppets three examples). Belgian four-piece Evil Invaders proves to be a formidable force in the speed/thrash genre from their first two records – Feed Me Violence from 2017 especially potent in proving that these musicians can open up the playbook, shift gears, and still be aggressive and memorable. Making Shattering Reflection, the latest effort, and five years beyond that outing, even more important to see where the band wishes to take themselves (and the audience) through these ten tracks.

The fierce galloping triplets and pounding tempo for opener “Hissing in Crescendo” gets the blood pumping right away – while Joe unleashes some piercing Jon Oliva-esque / Hall of the Mountain King-era shrieks throughout that make hair follicles stand at full command. A heightened sense of 80’s-oriented traditional riffs pops in to give specific arrangements additional earworms – while never forsaking the energetic main components that have always been a staple in the Evil Invaders sound. The circular guitar melody for “Die for Me” and tapping sequences against the clean/electric contrasts with “My World” sure to elicit roaring approval – expanding the dynamics of the group through additional background harmonies and primal venting especially in the latter cut. Blazing lead play between Max and Joe aids the cause, while the steady rhythm section abilities of Joeri and Senne Jacobs on bass/drums capably move from lower to highest gears – even in a calmer, reflective number like “Aeon” where subtle feedback and layers penetrate a melodic instrumental in a great tradition of Metallica/Testament meets Metal Church.

The biggest growth takes place a longer song like the six-minute plus closer “The Circle” and semi-ballad “In Deepest Black”. Joe working harder than ever on his clean melodies and falsetto screams to add more tools to an already serrated raspy roar, allowing the traditional/power components to shine even bigger in a way that exposes nuances of Savatage, Crimson Glory, King Diamond and the like. Where Feed Me Violence may have shown the more aggressive side of the band, Shattering Reflection dials in the affinity for classic heavy metal from the 80’s to make this another outstanding, benchmark outing.